At its eastern extremity, the state of Tennessee comes to an end in a point, sandwiched between Virginia and North Carolina, and right in the tip of that point are the towns of Johnson City, Bristol, and Kingsport. Around 200,000 people live in this area, but flying into the Tri-Cities Regional Airport they're not much in evidence. Instead, the overwhelming impression from the window of the plane was one of bucolic pastoralism - rolling hills and fields, the occasional barn, cows, and scattered wooded Appalachian peaks and ridges. I don't know whether Tolkien ever visited eastern Tennessee, but it looks as close to the Shire as anywhere I've ever been.

As it turns out, one of those rolling hills was hiding something very special, which was why I was in the Tri-Cities region. The hill in question - which is, in truth, more of a bump than a hill - lies just outside the town of Gray. It used to be crested by Fulkerson Road, a rural byway that connects with TN 75, and was a notorious accident blackspot; traffic coming over the brow of the hill had little or no time to slow down if the lights at the intersection with 75 had turned red, leading to collisions. So in the spring of 2000 the Tennessee Department of Transport decided to remove the hill, or rather make a cutting through it.

Initially the road crew were cutting their way through the red soil that is typical of the region, the eroded remains of limestone. But they hadn't gone far before they encountered something that was a lot less familiar - a dense, black clay. Because they weren't expecting this, the crew stopped digging and called in a geologist. Which is where things started to get interesting, because closer inspection revealed that the clay contained bones.

Before we get to what they found, we need to take a couple of steps back. If you've been reading this blog for a while (and yes, there are one of two of you that have) you'll know that one of the most frustrating things about being a paleontologist is the limitations of the fossil record. It's one of the most powerful pieces of evidence for evolution, but as a record of life on Earth it's annoyingly incomplete. The chances of any particular animal of plant being fossilized are infinitesimally small, the chances of it being discovered are even smaller. Multiply those two probabilities together and you have… well, a much, much smaller number.

Even when you do find a fossil, the amount that you can learn about what it was, and where it lived, is often very limited. Not all of the animals in a habitat, or even all of the parts of one animal, get preserved. It's a tribute to the diligence of paleontological researchers that we know as much as we do, but even that isn't very much. Every now and then, however, we discover fossil sites that deviate from this norm, because they preserve and unusually rich diversity of animals and plants, or because they preserve parts of the organisms that don't usually fossilize.

Paleontologists call these sites Lagerstätte," which means "storage places" in German, and they are very, very rare. Worldwide, there are probably less than sixty of these sites known. And it just so happened that, with the pure, dumb luck that accompanies many great scientific discoveries, the Tennessee DOT had driven their bulldozers right into one.

Between 5 and 7 million years ago, around the same time as our earliest ancestors were parting company (in evolutionary terms) from the ancestors of chimps, a cave system formed in the limestone just outside what is now Gray, Tennessee. The roof of that cave system collapsed, creating a sinkhole that filled with water. Many types of animal, both big and small, lived around and in the sinkhole, and when they died, their bodies sometimes ended up in the water, where they sank to the bottom and joined the remains of the various types of plant that grew there too.

Over many thousands of years all of that organic material got compressed down to form a dense black clay, that eventually filled the sinkhole like a plug. As it turns out, this plug was more resistant to the forces of erosion than the limestone that surrounded it. When the limestone weathered away, the clay was left. Over millions of years, the hole became a hill. And the descendants of those ancient African apes evolved into humans, invented the pick-up truck, and took to driving too fast over the crest of that hill.

Of course, back in 2000, no-one realized this yet - all they had was a layer of strange black clay and some bones. The State Archaeologist was called in, along with researchers from the University of Tennessee at Knoxville. Their preliminary investigations revealed that the bones were fossils and that the site was a rich one. The problem was that it was still in the way of the road.

At this point, however, the story gets a hero, in the form of the then Governor of Tennessee, Don Sundquist. Some politicians might have struggled to grasp the importance of the discovery. Sundquist did not. He decreed that the site was to be preserved for research and education. TN 75 was moved, Fulkerson Road was closed, houses were relocated and, most remarkably, an $8 million Federal Highways Administration grant was made to the nearby East Tennessee State University to develop a museum at the site.

Fast-forward 14 years and here I am, standing on top of what was once the bottom of that Miocene sinkhole; reverse topography is a mind-bender. At first sight, it doesn't seem like a hive of scientific activity. The remains of the cutting started by the DTOT crew are still there, forming a shallow trough through the top of the hill. Grass has grown back, and the only signs of excavation are some small pits, covered by temporary shelters; spoil heaps, and a large stack of yellow plastic bags filled with dirt.

But turn around, and the fruits of that $8 million grant come into site - two modern buildings that cradle the hillside, connected to the dig site by a bridge that allows fossils to be wheeled directly into the Museum prep lab. Those few small pits, a tiny fraction of the 5 acre site, have already yielded 18,000 fossils. Pause and consider that number for a moment. 18,000 fossils. Included in that total is what is now the world's largest collection of fossil tapirs; remains of nearly 80 individuals of the extinct species Tapirus polkensis, including many complete skeletons. It also includes 4 rhino skeletons, a camel, an early relative of elephants, a horse, peccaries, a ground sloth, rodents, rabbits, shrews, turtles, alligators, snakes, lizards, fish, birds, salamanders, frogs, plants, and even insects. 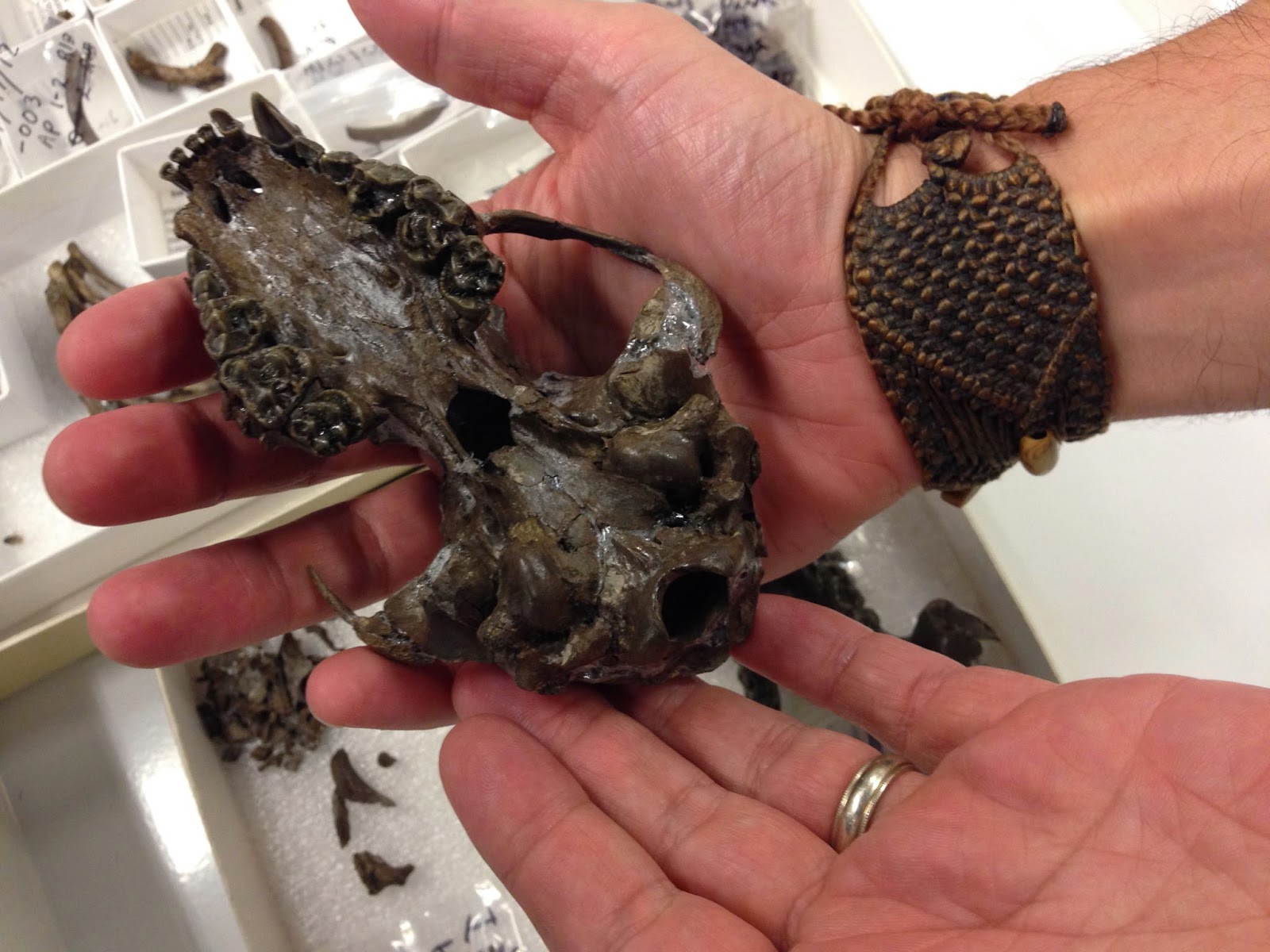 And then, there are the pandas. Yeah, that's right. Pandas. Not the giant, black and white bear, but the smaller, red panda, or rather an extinct relative of that animal. The red panda is not a bear and is only distantly related to them - it sits within a large group of carnivores, including raccoons, weasels, otters, and skunks. Today, you'd have to go to the temperate forests of the Himalayas, in China, India, or Nepal to see one. But 5 million years ago, they were quite at home in the ancient Appalachians, and their fossilized bones, including an almost complete skeleton, are there in the pit at the Gray Fossil Site to prove it.

The pandas are a strong indicator that there was something odd about the Appalachians at the end of the Miocene. For most of the continent, this was a time of global cooling, increasing aridity, and the relentless expansion of grasslands. But the fossils at the Gray site are evidence of a different kind of Miocene habitat - a remnant of the forested environments that once covered North America.

On every side, the Gray fauna is full of surprises. The Miocene fossil record of America is dominated by horses, but at Gray they've found only one horse and unlike today's horses it's a browser, not a grazer. The rhinos are from the extinct genus Teleoceras, a relatively common and familiar animal (at least to paleontologists). But rather than the barrel shaped, short-legged rhino seen in locations from Nebraska to Florida, the species at Gray is slimmer and longer legged.

It would be easy to get distracted by the megafauna at the Gray Fossil Site, but what makes it so unique, and so rich, is the care being taken in retrieving the smaller fossils. Every shovelful of dirt that comes out of the out gets run through a series of sieves of ever decreasing mesh size, before being transported into the adjacent lab where a small army of volunteers (at times more than 50 strong) picks through the resulting fragments for isolated bones and teeth. It's painstaking work, and it means that exploration of the site is proceeding slowly. But the picture of late Miocene Tennessee that is emerging is astonishingly rich. And with every single object collected being mapped digitally in three dimensions, it's possible to focus in on the most promising areas for new discoveries.

So by now I hope that I've convinced you that the the Gray Fossil Site is a paleontological treasure, but what makes it really unique, in my opinion, is having research, collections, and exhibit facilities immediately next to the site. As I mentioned above, material leaving the excavation goes directly from the pit to the prep lab and from there to the collections and, for some of the material, into the exhibits. The research program itself is on exhibit, with a viewing platform overlooking the pit and windows from the galleries into the prep lab and the collection storage space. I'd seen all of these things at other institutions, but I'd never seen anywhere where they were integrated so well.

Which brings us to the back to something I talked about in an earlier post. One of the big challenges facing museums is how we center our programs more effectively on the collections that form the core of our museums. In many cases we're working in institutions that have accumulated a mass of programmatic baggage over a long history. Focusing can be difficult. But in the case of the East Tennessee State University Natural History Museum, the focal point is clear and present. You can see how all the pieces come together - collections, research, exhibition - to make the magic.

The ETSU Natural History Museum is still at a relatively early stage in its development, building programs off the incredible resource that was discovered 14 years ago. The trick will be one of balance - how can they build public programs that truly do justice to the extraordinary resources at their disposal; how they will develop the strongest possible public programming without detracting from the care of their growing collections; and how they will find the time with the growth of both collections and public programs to develop a research program that feeds both. How they meet this challenge of balance will be fascinating to watch.

One thing that they will not be short of is work The pit at the Gray Fossil Site is 100 feet deep in places and with the current rate of excavation it will take hundreds of years - at least - to get to the bottom. Who knows what's down there?

I actually wrote this post several months ago and it's been stuck in limbo since then. Fortunately I don't think it's aged much, but just in case you were wondering why I'm not complaining about leadership summits and valuing collections… those are coming. Once I finish writing a bunch of grant proposals. Sigh.