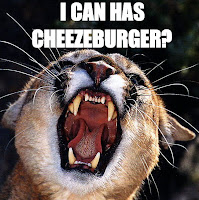 Nothing says summer in Britain like a spate of big cat sightings. Honestly, this has been going on since I was a kid - back in my day, it was known as the Surrey Puma. Since then we've had the Beast of Exmoor, the Kellas Cats, the Black Beast of Bodmin Moor, and others too numerous to mention. The latest one is the Coulport Cougar, which you can read about here - I particularly like the title "Unidentified 'big cat' filmed near military base" which makes it seem super-sinister, as if the British government is testing some new sort of feline superweapon. There's even a movie! And yes, it surely is a cat, although I'd say it's debatable quite how "big" it actually is.

As the article reports, big cat sightings in Britain go back to the Middle Ages, which if nothing else goes to show that the summer was a slow time for news back then as well. There are a variety of theories to explain the existence of these cats, ranging from the cryptozoological (there is an undescribed species of large cat in the UK that has managed to escape detection on one of the most densely populated islands in Europe - see Di Francis et al), through the paranormal (the "cats" are not cats at all, but strange psychic manifestions - see Janet & Colin Bord), to the prosaic (they are exotic pets that have been dumped by their owners). What do I think it is? I think it's a cat.

Call me an old-fashioned, stick-in-the-mud museum guy, but we need a body. Photos, videos, and eyewitness sightings are notoriously unreliable. The Kellas cats, which were frequently cited as a new species, turned out to be as introgressive hybrids, representing animals with varying degrees of Scottish wildcat and domestic cat ancestry. Who made this determination? A colleague of mine at the National Museums of Scotland, Andrew Kitchener. How did he do it? He looked at a bunch of dead Kellas cats. I rest my case.

PS: just to show I'm not a total cynic, I am prepared to accept that there is one part of the world where there may be some truly odd "feral cats," and that is Australia. To bring you up to speed, I suggest you go and read this very interesting blog post from Darren Naish. Then go and read this counterargument and see which one strikes you as most convincing.
Posted by Chris at 11:02 PM