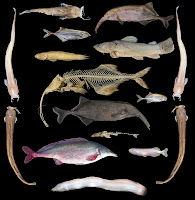 The New York Daily News reports that AMNH is suing American Airlines for the loss of a shipment of fish. According the article, AMNH had sponsored students from the University of Kinsasha to collect the fish from rivers in the Democratic Republic of the Congo. The fish were preserved in formaldehyde and sealed in two layers of plastic bags, then packed into two barrels and shipped to the US. When they reached Brussels, in October of last year, an airline official noticed the barrels were leaking and pulled them from the flight. At the time, the Museum was told that the barrels would be repacked and shipped on to NYC aboard an AA flight. The barrels never arrived and AA eventually claimed that they had to be destroyed because they were "leaking and full of maggots."

Airlines are understandably cautious about what they put in the holds of their aircraft and this causes museums, which frequently need to ship unusual cargo around the world, no end of problems. I don't know the full details of this case, but my guess is that the question revolves around whether the airline has the power to destroy a shipment that it considers to be hazardous. They probably do, at least under certain circumstances, but since I doubt either party wamts this to come to court the likelihood is the AA will settle.

The question then is, how much? Minimally it would be the costs of sending another student collecting party into the field. Unfortunately it's not as simple as that. In a very real sense these collections are irreplaceable, a point that often comes up when we try to figure out a basis for insuring the specimens held in museum collections. It's impossible to exactly replicate a collecting event, the multiplicity of biotic and environmental factors that mean that every specimen caught at a particular time and place is unique. Even if you can catch the same species they will be represented by different individuals, with different parasite loads, different gut flora and fauna, different stomach contents.

As we become more aware of the importance of the complex data associated with natural history collections, these small differences assume greater importance. Of course, all is not lost if you have the collecting data - the notes and observations made by the researchers at the time the specimens were caught. But these data can only address the factors that were thought to be important at the time of collection. They may not be able to address new questions asked by a future generation of researchers. This is one of the reasons that we spend so much time and effort preserving specimens, and why we worry that our preservation techniques may inadvertantly close off future avenues of research.

But there's another reason why we should mourn the loss of these specimens, and why AMNH should push hard to get a substantial settlement from AA. It was best expressed by a former colleague of mine some years ago, when he was explaining why he was so irritated by visiting researchers who are careless in handling specimens in the collections. His point was that collecting is not easy - people devote enormous time and effort going to the far reaches of the globe to obtain this material; they work hard, under conditions that are at best spartan and at worst positively unpleasant, often at risk to their health and sometimes their lives. That herculean effort in support of science and society is worthy of respect, whether by a student visitor to the museum or one of the world's biggest airlines.
Posted by Chris at 1:24 PM