The Law and an Immigrant's Tale 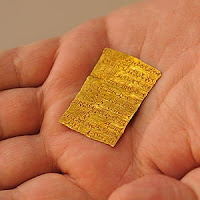 Sadly, it's not unusual to see stories in the media about museums being found in possession of items that were stolen from victims of the Holocaust. But it's much rarer to hear of Holocaust victims being in possession of items stolen from museums. For this reason, my eyebrows shot upwards when I read this story in the New York Post a few weeks ago.

The short version is that a tiny, 3200 year-old Assyrian gold tablet was found in the estate of Riven Flamenbaum, an Auschwitz survivor who emigrated to the USA in 1949 and died in Long Island in 2003 at the age of 92. It turned out that the tablet had formerly been part of the collections of the Vorderasiatisches Museum in Berlin and was now valued at around $10 million. According to the Post, the Museum sued Flamenbaum's heirs for the return of the artifact, only to have a New York court turn down the claim.

The Flamenbaum's attorneys (and the Post) presented this as a case of natural justice and indeed it makes a compelling tale, a classic immigrant's story. Riven Flamenbaum loses his entire family in the Holocaust. Having survived the horrors of the camps and making his way through a shattered, post-war Europe, he trades a pack of cigarettes to a Russian soldier and receives a tiny gold tablet in return. He travels to America with just a few possessions - some rare coins and the tablet, which he pawns in order to purchase a liquor store on New York's Canal Street. He pays back the pawn broker and regains his treasures. He goes on to make a life for himself; he marries another Auschwitz survivor and together they raise three children. When he dies he leaves them the tablet, which they believe to be worth only $100, only for them to find that it is worth a fortune. Then some museum - and a German museum at that! - comes calling, trying to claim the tablet is theirs. Hell, wouldn't you want that family to keep the tablet? I know I would.

Which made me feel very uneasy. It was a heartrending story, but did that make the Court's decision right? What was the basis of the decision? Media coverage, such as it was, understandably focused on the human interest aspects of the story - who cares about the dry minutiae of the legal decision when you have parents that both had a huge number 5 tattooed on their arms and a father whose hands and feet were permanently numb from the treatment meted out to them in the camp? And three children with no grandparents, no aunts or uncles, and no cousins, because the entire family on both sides were murdered. But how does a Russian soldier plundering artifacts from a German museum differ from a Nazi soldier plundering from, say, a French museum? In the eyes of the law, isn't this the same thing?

Well, fortunately for pedants like me, you can read the entire ruling on line here. And very interesting it is too.The Russian soldier and the pack of cigarettes disappear, because without Riven Flamenbaum there was no-one to testify as to exactly how he obtained the tablet. The Museum's ample evidence that the tablet came from their collections also turned out to be irrelevant. While the family's lawyers came up with a number of lines of argument in defense of their position, the one that prevailed in the end was actually the most simple one - that the Museum had known as far back as 1954 that the tablet was in New York, but that they had failed to follow up on this; they had not reported the tablet as missing, had not approached the American authorities or Interpol, or taken any other steps to investigate the loss. By failing to show due diligence the Museum had allowed the Flamenbaums to believe for 60 years that they had good title to the tablet. That, combined with the fact that Riven Flamenbaum was no longer alive to testify, prejudiced the estate's ability to defend the claim.

This is called the Doctrine of Laches and it basically says that if you don't pursue a claim in a timely manner, and if because of this the defendent has a harder time defending the case than they would have had if you'd made your claim earlier, then the claim can be barred. The Museum had tried to argue that for an East German Museum in the 1950s, political and financial restrictions would have made it impossible for them to launch an international investigation - unfortunately, among the briefing documents submitted to the court by the Museum's lawyers was a previous case involving a claimant museum in the GDR which had made strenuous attempts to recover stolen artwork, beginning as far back as 1945. In that case the defendant had been unable to use a laches defense.

So, once you strip away the human interest elements, the crucial issue for museums is this - if you think an object has been taken, you cannot afford to sit back and see what happens; you have to act promptly and start accumulating proof of due diligence in seeking the return of your material. Sixty years from now will be too late. There is a part of me that feels very sorry for the Vorderasiatisches Museum and wishes that this remarkable and beautiful object was on display there - not least because it would be an opportunity to tell the story of Riven Flamenbaum to a whole new audience. It's not a million miles away from the sentiment expressed in an email to AOL News by Hannah Flamenbaum. Regarding her father and the tablet, she wrote:

"He stated that it was all he had left from 'that bitter time,' and he wished to hand it down to his children and future generations to serve as a reminder of the brutality and decimation of his family at the hands of the Nazis."
Posted by Chris at 11:15 PM