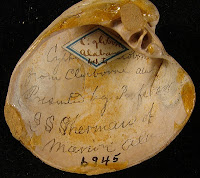 Following on from my previous post extolling the virtues of harnessing social networking technologies to provide a window into museum work, I wanted to give a shout-out for my colleague Jess Utrup, who has just launched a blog called Spineless Wonders, which focuses on the work of the Museum's Division of Invertebrate Paleontology. Never let it be said that invertebrate paleontology is all about quantity over quality! (And no, I have never said that, even though they are rocking over 4 million specimens in comparison to my 75,000).

One of the startling thing about Peabody over the last couple of years is what a fertile environment it's been for new blogs; there have been six so far, covering four of the collections (Historical Scientific Instruments, Invertebrate Paleontology, Vertebrate Paleontology (that would be me), and Vertebrate Zoology), an exhibit (the Point Pelee diorama), and the birds of West Campus. Combine that with our Facebook page and I hope we're giving our audience a whole new set of insights that we weren't doing two years ago. Whether you actually care is another matter, but at least you can't argue that we're not putting it all out there.
Posted by Chris at 10:35 AM