When I last wrote about our planning for the Fossil Hall rennovations, we were about to go into the collections in search of display-worthy material for the Cenozoic hall. The process of selecting specimens is not always straightforward, even in a relatively large collection like that of the Peabody. On the one hand, you want to select specimens that illustrate the story that you're telling. On the other hand, you also want to display the best of what you have, regardless of whether it fits the story. And in the case of our project there is, like some freakish mutant child, a third hand - the Zallinger mural. 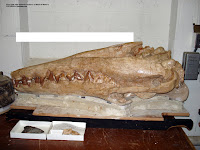 As I mentioned in an earlier post, one of our aims in redesigning the fossil halls was to place the spectacular murals of Rudy Zallinger in the context of present-day science. So as far as possible, we've tried to include specimens of animals and plants that are shown in the murals. In the Cenozoic hall, this presents us with a couple of problems. First, "The Age of Mammals" mural is solidly North American - we do have exceptional collections of North American fossil mammals, but we also have outstanding specimens from South America (see my earlier post on these) and from the Fayum Basin of Egypt - there is no way that we are not displaying our stunning, yard-long skull of the extinct whale Basilosaurus just because it's not in the mural.

The second problem is that sometimes the species that Rudi chose to illustrate in the murals are not represented in our collections by display-worthy specimens. Having hunted high and low through the collection for a decent specimen of Tetraclaenodon, a primitive ungulate from the Paleocene, I can testify to this. The best we had was some fragments of lower jaws, isolated teeth, and random limb bones. However, we have excellent specimens of its close relative, Phenacodus. If we include Phenacodus instead of Tetraclaenodon, is that OK? Well, as it happens it is, because Phenacodus is also in the mural. But there are plenty of cases, such as the early primate Pelycodus, we have only teeth and the alternatives (e.g. the lemur-like Notharctos) are not in the mural. What do we do then?

The answer, of course, is we chill out. We don't have to have all the animals from the mural in the gallery, and neither to we have to only use animals from the mural to tell the story. The rich, subtropical coastline of the Eocene Tethys Ocean, preserved in the desert sediments of the Fayum Basin, provides us with just as powerful image of the hothouse Earth as the rainforests of Eocene Utah and Wyoming. And why should we worry about the absence of a skeleton of the early perissodactyl Hyracotherium in our collection when we have one from its close relative Orohippus? The fact that this Orohippus is as much plaster as it is real bone is a problem, but one that we'll address if and when we remount it for exhibit.

Nonetheless, each of these choices needs to be carefully weighed and discussed between the designer, the exhibit planner, and me. The end result was a list of several hundred fossils, and accompanying photos (some of which I've included here) loosely divided between the three climate periods that I discussed in an earlier post. The challenge then, is to find out whether we could fit all of these into the Hall and still have room for visitors to circulate. Plus, when they circulate through the gallery, they need to do so in such a way that we get our story of across. I'll talk more about this in a future post.
Posted by Chris at 5:55 PM